Together in Song Regional Choral Awards 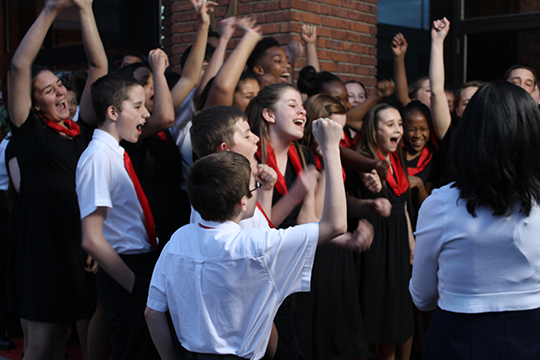 The fifth season of western New England’s premier celebration of choral tradition concluded with the much-anticipated Together In Song Regional Choral Awards, where the eight top groups from this season sang live for a chance to win their very own television special on WGBY-TV. Congratulations to the top performer this season, Hall High School Choraliers from Hartford, CT!

The Together in Song Regional Choral Awards Finalists: 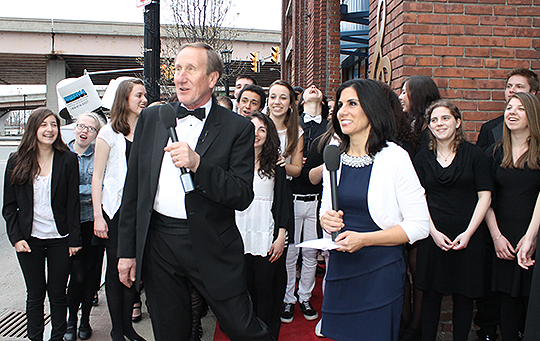 Judges for the live Regional Choral Awards are Clifton “Jerry” Noble, Jr, Richard Coffey, and Jane Hanson. Their scores, along with votes tallied live from the viewers, determined this year’s top group!

As in past seasons, the live broadcast concludds with a special performance including members from the season’s 24 choral groups. The show was a spectacular showcase of our region’s best choral talent!  In addition to being broadcast live on WGBY, the show was also streamed live over the internet.

In addition to our support for the 5th season of Together in Song from MassMutual, additional support for the finals was provided by McClelland’s Florist.  We also want to thank the following for their help with the live broadcast:

Jane Hanson has a singular mission: Joy and Excellence through the Performing Arts. She holds Bachelor’s and Master’s degrees in voice and choral conducting from the University of Massachusetts at Amherst (UMass) and the Cincinnati College–Conservatory of Music, respectively. She served on the faculty of the Dept. Of Music and Dance at UMass from 1999-2001. She went on to found her own company, The Proficient Musician (now part of Jane Hanson Productions), which is dedicated to providing exceptional skills-based professional development opportunities to music educators and performers. She has taught voice to students of all ages and abilities, from amateurs to professionals, in any and all genres — from musical theater to opera to heavy metal — technique is technique! Her former students can be found at top music conservatories across the country, on national Broadway tours, and on album covers featured by Rolling Stone Magazine.

Ms. Hanson served for six seasons as conductor and director of the Keene Chorale, a ninety-voice community choir in Keene, New Hampshire. Ms. Hanson has been fortunate to music direct and conduct many meaningful projects, including a presentation of Paula Kimper’s opera The Captivation of Eunice Williams at the Smithsonian Institution in Washington, D.C., a performance of Kimper’s opera The Bridge of San Luis Rey, PACE Theater’s hip-hop-inflected version of West Side Story, Pioneer Valley Ballet’s 40th Anniversary Concert of Cole Porter, and Keene Chorale’s 30th anniversary celebration concert, featuring Beethoven’s Mass in C and Choral Fantasy. She has enjoyed a long and fruitful collaboration with the Northampton Community Music Center (www.ncmc.net), through which she has been able to offer Solo Vocal performance Classes for teens, among other programs.

Composer/pianist Clifton “Jerry” Noble, Jr. was born in 1961.  His father taught him to play piano and guitar at age 5, and encouraged him to write music shortly thereafter.  He earned degrees from Amherst (BA 1983) and Smith (MA 1988) Colleges, and has served as the Staff Accompanist at the latter institution for 25 years.  His compositions and arrangements include vocal, choral, chamber, and orchestral music and he has been commissioned by the Springfield Symphony Orchestra, the Holyoke Civic Symphony, the Longmeadow Chamber Music Society, the Assabet Valley Mastersingers, the Canticle Singers of Baltimore, saxophonist Lynn Klock, the choral societies of Smith, Amherst, and Mt. Holyoke Colleges, the Mak’hela Chorus and many more ensembles throughout the United States.  His choral music is published by Treble Clef Music Press, Warner-Chappell Music Publishing, and Artisttec, Inc.  A CD of his sonatas for violin and piano was released by Gasparo records in 2006.  The CD “Connections,” containing music he has written for Lynn Klock was recently released by Albany Troy.  An avid traditional jazz pianist, Jerry has also recorded 9 CDs with clarinetist Bob Sparkman, improvising their way through the American songbook, and he recently played on Kelson Smith’s “Comfort Zone” CD. Visit him on the world wide web at www.cliftonjnoblejr.com or www.bobandjerry.com. 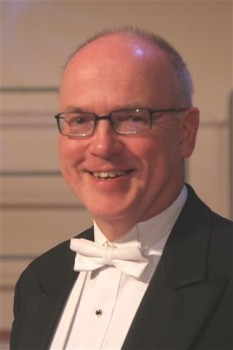 Since 2005, Richard Coffey has been the Music Director of The Hartford Chorale, the region’s principal symphonic chorus, appearing frequently with the Hartford Symphony Orchestra.  Since 1972, he has been Minister of Music for the South Church of New Britain where he conducts a choir of volunteer and professional singers. In 1973 he established The Music Series at South Church, the principal presenter of local, national, and international talent in the central Connecticut region, and in 2003, he established, through South Church, a region-wide nonsectarian choir for children, The Main Street Singers. Mr. Coffey has served on the music faculties of the Hartt School and of the University of Connecticut. From 1998 until 1993, he was Chorus Master for the Connecticut Opera Association.

In 2014, Mr. Coffey stepped down as Artistic Director of CONCORA, Connecticut Choral Artists, which he founded in 1974 as the region’s first all-professional concert choir. He has been named Artistic Director Emeritus for the organization.

Mr. Coffey both prepares the Hartford Chorale for its large-scale productions, conducted by the region’s major orchestral music directors, and also designs, rehearses, and conducts the Hartford Chorale in concerts produced by the organization itself. Next season’s programming includes performances of the Fauré Requiem, Handel’s Messiah, and Mendelssohn’s Elijah. In July 2014, the Chorale undertook a large-scale singing tour of France, with eighty performers presenting concerts in the Church of St. Etienne-du-Mont, Chartres Cathedral, and the American Church in Paris.